What causes some children to face overwhelming adversity, and grow into positive leaders and peacemakers? The answer, at least in part, is resilience.

Jack P. Shonkoff, M.D. of the Center on the Developing Child at Harvard defines resilience as, “A good outcome in the face of adversity. [It’s] the extent to which we can build capacities in all children early in their lives to be able to deal with whatever bumps in the road or major obstacles may be coming down the track.”

Natural aptitude plays a role in resilience, but it’s not something children are born with. According to Philip A. Fisher, Ph.D. at the Oregon Social Learning Center, University of Oregon, “It’s tempting to think about children as either having this resilient quality or not, but resilience is built over time, just as, and in parallel with how the architecture of the brain is built over time.”

There is strong evidence that refugee children can develop the resilience to overcome their obstacles — provided they have the right support system. A 2016 study published in the Journal of Pediatrics showed that refugee children — particularly those under the age of ten — suffered from emotional and behavioral issues, but that those issues could be overcome with help.

According to Dr. Ripudaman Minhas, one of the study’s authors, “The existing evidence suggests that children of refugee backgrounds have the potential to perform just as well as their peers when provided with supportive resources and even have similar rates of high school completion.”

In fact, given the opportunity to succeed, refugees tend to excel, and even outperform their native-born peers, according to therapist and social worker Michael Ungar Ph.D:

A report by Statistics Canada shows that refugees, especially those who are made to feel welcome in their host communities, outperform non-refugees when it comes to getting a college education. More education means higher lifetime earnings.

And higher lifetime earnings can mean a greater likelihood that refugees (or their children) will buy homes and create stable communities. It’s a package deal. Communities with higher rates of home ownership are typically the most safe.

Connect the dots, and one can see that stable communities are likely to be those with a higher concentration of new immigrants (including refugees) who are committed to home ownership, educating their kids, and taking advantage of the opportunities offered to them.

However, the process takes time and community support — not to mention the opportunity to learn in the first place. And for many at-risk children, those conditions simply don’t exist. 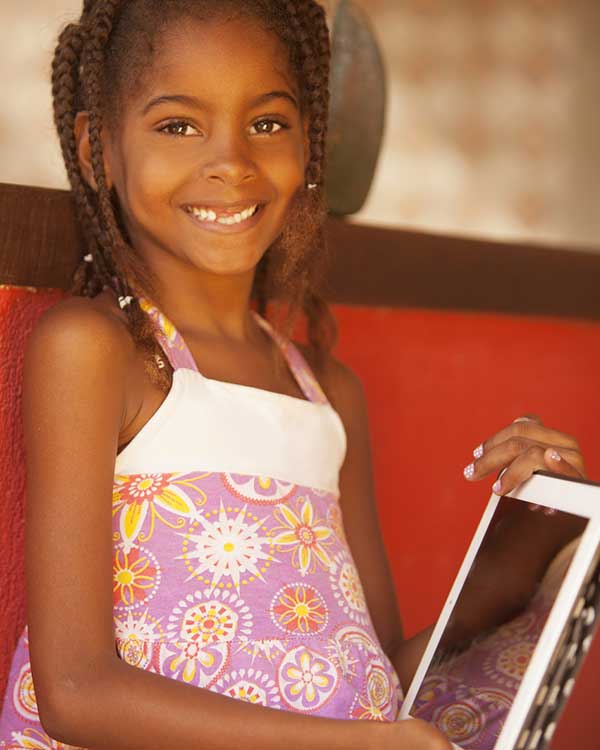 Even in areas where free education is available, child refugees may not be able to participate in traditional schooling because of economic factors. The UN High Commissioner for Refugees (UNHCR) points out that schools impose indirect costs and deprive families of immediate opportunities, particularly for older children:

“Secondary education is a long-term investment whose ultimate benefits can be difficult to see for a family that has lost everything, especially when adolescents can bring in much-needed cash here and now. Sending adolescents out to earn a wage through child labour is a route many refugee families find difficult to avoid, the more so if keeping them in school will present an additional financial burden because of transport costs, fees, books and pens.”

Technology can be a vital part of overcoming educational obstacles, because it allows refugee children to participate in environments where traditional education isn’t practical, according to the UNHCR:

Refugees may sometimes find themselves in remote places but that does not mean they have to be cut off from the rest of the world. Besides the communications available in towns and cities, many refugee camps are equipped with internet access, allowing e-learning in addition to face-to-face teaching in the classroom.

To support at-risk children, educational initiatives need to harness technology to support them in non-traditional environments, while addressing their complex emotional and developmental needs.

What Does Support Look Like for Children at risk?

According to The Center on the Developing Child, some of the main factors in building resilience are:

Through its curriculum and pedagogical approach, The Global Schoolhouse Initiative brings these four areas of resilience development to the camps and communities where these children live.

Our program builds adult-child relationships by recruiting adults in the community to serve as teachers. Children have the chance to meet with an adult every day to learn about the world, challenge their minds and escape the stress and dreariness of daily life at a refugee camp. Over time, this approach builds strong, positive relationships between children and their teachers.

This builds resilience in both parties — the children benefit from bonding with their teacher, and the teacher feels empowered to be a leader and mentor to their pupils. They’re joined in the quest to overcome their obstacles and learn the skills they’ll need for a brighter future.

Our classes challenge students to think about how the world works, while empowering them to see their role, both within and beyond their communities. Children are able to develop a sense of self-efficacy both by mastering content, and by building a better sense of their place in the world. They’ll start to overcome feelings of helplessness, anger, and fear, to see beyond their immediate circumstances and develop the skills they’ll need to be successful adults.

Sitting in a class and focusing — even for an hour — requires students to self-regulate. This can be a challenge, particularly for high risk students. They face tremendous amounts of stress and may have been out of school for multiple years without daily activities that require them to sit down, put their stress aside, and focus.

The Global Schoolhouse Initiative will help students develop the self-regulatory and adaptive skills that every adult needs. They’ll learn to concentrate on things beyond their basic needs and start working towards education and other long-term goals.

Drawing on Their Own Sources of Strength and Hope

The GSI program is taught in students’ native language, with respect to their culture and traditions. At the same time, the lessons focus on global topics like ecosystems and the environment, combined with universal emotional themes like compassion and empathy. This gives students the opportunity to engage with our program from their own cultural context and build on the things they draw strength from, such as their family, faith, and community.

Students can see their own lives in a new light. They will learn to understand the resilience of their community in the face of adversity — as well as the need to build something better for the next generation. From their own cultural roots, they can grow into successful, compassionate global citizens and leaders.